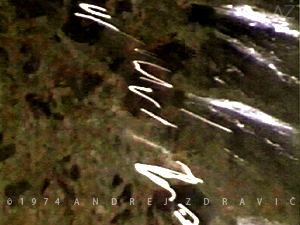 Shot on the Niagara river rapids, Waterbed holds the basic premise of all my endeavors : to infuse the viewer with a life force, a shot of energy that would enter the bones and whirl up the spirits! I initially shot the film - following the 'method' used in my early work (Camera Dances) - by listening to music in the headphones. Later, during editing, I dropped the music in favour of a composition made with natural sounds of the river.
AZ