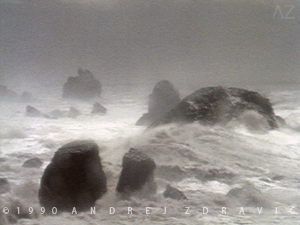 Ocean Beat is the child of my continuing desire to understand and see better the grand forces of nature and the message they portend for humanity. The Ocean fascinates me: its rhythms and ever-changing moods seem to reflect the breath of inner space. It is a study of rhythm, tension and release, persistence, the intimate immensity of time.

Filmed on the coasts of California, in Alaska's Glacier Bay and in the Hawaii Volcanoes National Park (1980-1990).
The post-production was financed in part by German Television ZDF.
AZ, 1990 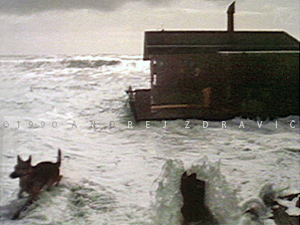 “Zdravič's feature-length Ocean Beat fairly seethes with the intensity of his feelings. […] It takes up Zdravič's ongoing fascination with the ocean as subject, both sui generis and as an unfettered metaphoric vehicle of artistic exploration. Though it ranges from the minute bits of sea foam in close-up, scudding across tide-shiny sand - to the majestic pounding of behemoth surf against towering rocks, the film gives nothing away to mere earnestness. No one mood dominates, no one part of the landscape; there is no overall 'message', but the power and variety of the sea itself, as a kind of conduit for the spirit's own workings. Vigor and resourcefulness of image and sound catch the imagination up in rhythmic sweeps whose orchestrations are counterpart to the twists and turns of plot in a particularly engaging narrative thriller.”
Calvin Ahlgren, San Francisco Chronicle, 1991 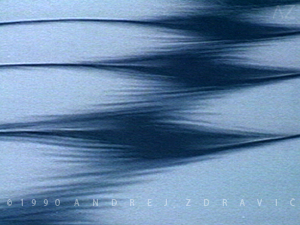 “… In his film about the ocean and its waters, its waves and foam, Zdravič is again the water, the wave and the foam, maybe even the gentle light-footed sandpiper running on the sandy coast in front of a wave that is chasing it but will never catch it, just as Achilles will never catch his turtle. The white water and foam, the bubbles and the mist, the roaring gray waves, the long, endless rollers, and then the almost microscopic ripples in which the mightiness of the ocean dies away on dry land. All this water carries within music that even composers like Händel and Smetana were unable to turn into notes, rhythm and counterpoint. Or Claude Debussy, who paved the way to musical impressionism.”
Bojan Štih, litterary critic and essayist,  Dnevnik, Ljubljana, 1987 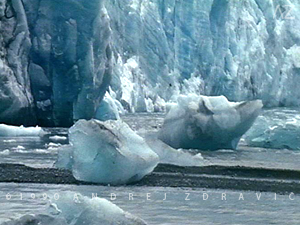 […] "Watch the last ten minutes of (Zdravič 's) film Ocean Beat and you will sense, in his clear fascination with the close contact between the deepest interior (the glowing lava) and the plain surface (the sea surface), the singular simultaneity of sublimity and eeriness that characterises all great moments of image or concept creation. In the shelter of this wild line of the exterior that folds inwards, a new life is possible! I am deeply convinced that this is the very point where the "monumental moments" of Zdravič’s sound visions occur. The point of coincidence of the volcanic eruption, the microsurgical incision into human tissue or the beat of an eyelash. The point where the exterior sings, where the outside resonates… In this perspective, a single flake of snow-white sea foam that the wind picks off a wave and blows across the mirror surface of a sand beach onto dry land only to lift it up in the air beyond the sand dune - encapsulates the entire evolution of life-forms from the primordial Prebiotic Soup to the most developed humanoid. Or, as Zdravič would put it: "a single burning twig contains the entire cosmic force than can no more."
Stojan Pelko, 'Monumental Moments', Maska, 1996 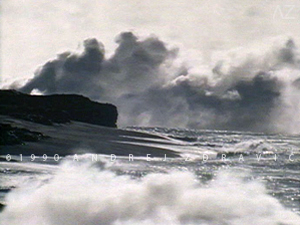