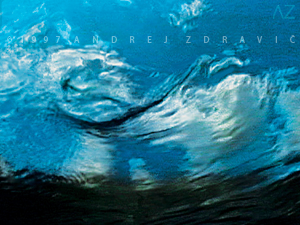 Riverglass is a poem to one of the most beautiful rivers in the world, such as I experienced over four seasons. Through the liquid lens of crystalline water we perceive, perhaps for the first time, the magical underwater world of turquoise volumes, flying bubbles, pulsating sun membranes, dancing stones, droplets of snow... Four years in the making, Riverglass is not a documentary about the river Soča - it is a poetic river ballet to the music of natural sounds.

I dedicated Riverglass to my mother-musician for leading me towards seeking light and beauty in the world.
AZ, 1997

(The film was preceeded by a related work, the Secrets of Soča - Time Horizon installation (Skrivnosti Soče), 1995. Riverglass has a dramaturgy of its own and contains additional materials, especially of the winter season). 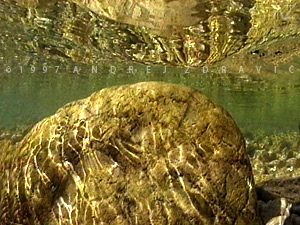 “Zdravič films the waterbed of his childhood river Soča in Slovenia, and he does it with such love and magic that as I watched it I wanted to be there too and I hope some day I will. A film of extraordinary beauty.”
Jonas Mekas, Filmmaker, Director Anthology Film Archives, New York,1999

Listen to Riverglass soundtrack  I  30 sec 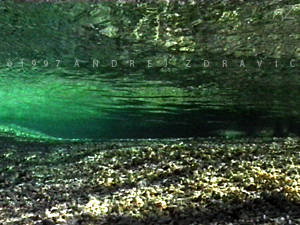 “Andrej Zdravič builds upon an extraordinary sensitivity for visual and sonic phenomena of the natural environment... As his former films, Riverglass is characterized by a lyrical and dramatic consonance between the life pulse of an almost personified nature/river and our biorhythm, cleansed of noise and civilisation overload.”
Ženja Leiler, Delo, Ljubljana, 1997 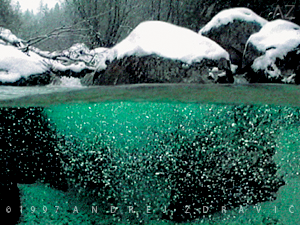 "... Riverglass is a metaphorical expression of the symbiotic relationship of people and nature, a relationship that need not be exploitative or invasive of nature in a damaging way, but that suggests instead the possibility of a healthy exchange and coexistence. […] Shifting the way we look at what we call the “environment’, the way we see our own position in relation to the rest of the biotic community, is fundamental to bringing about a shift in the way we live. That is essentially what Riverglass compels us to do: readjust our perception.”
Paula Willoquet-Maricondi, 'Framing the World', USA, 2010

"In this film shot over a period of four years with a tool devised by Zdravič himself, the camera, submerged in the river, is capturing the passing of seasons and with them, the evolving course of not only the vital liquid but also of all that surrounds it.
Although the film through its choice of approach seemingly distances itself from the notion of art and artist, we cannot forget that there is a man’s gaze behind the mechanical eye that has recorded for us an apparently eternal (and non human) flow In which lies the mystery linked to the mineral, the secret life of stones, the murmur of the forest, to the poetry flowing between the streams. It is also there - and not in logos - that man seeks consolation: perhaps as a return to a earlier state of thought, prior to being."
María Virginia Jaua, Salonkritiknet, Madrid, 2012