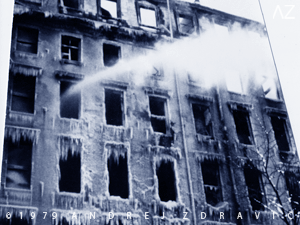 Dom is an amalgam of situations I encountered during the years of living in Buffalo and New York City. The film which depicts, among other things, demolitions of buildings and a large house fire on Manhattan, is a meditation on the meaning of 'home'. Dom was made in the spontaneous, edited-in-camera S-8mm film style.
AZ

“Dom is an investigation of old buildings discovering visual wonders amid decay, with the added fillip of a sense of horror. We see no people, but Zdravič makes us sense presences. He has a keen feel for the uncanny - what French master director Franju calls the insolite. Curious as it might seem, Dom is as unsettling as anything by Jacques Tourneur or Nicolas Roeg.”
David Ehrenstein, Los Angeles Herald Examiner, 1980

"The sense of dread and even horror lends an uncanny twist to the meaning of home."
Museum of Modern Art, New York, 1999