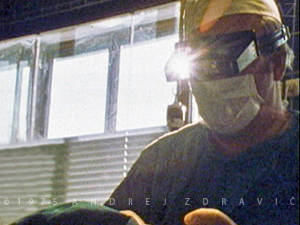 I dedicated Phenix to my father Franjo Zdravič, reconstructive surgeon, because he opened a new world of beauty and meaning for me. For some two weeks he led my way through rooms of very special climate - Ljubljana Medical Centre Burns Department - where threads of sighs, of nightmarish dreams, of misery, of compassion, of joy, are woven with hands of calm determination: to inflict wounds to a living being in order to give him/her a new form and function.
AZ, 1975

Listen to Phenix soundtrack  I  24 sec 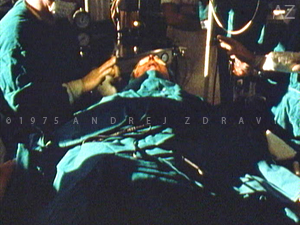 “I have never seen any of Zdravič’s work before but what I saw last Wednesday left me so intrigued that I am anxiously looking forward to seeing more of his work. I saw part of his surgery room film (Phenix), shot in Yugoslavia. It has an extraordinary visual and emotional power.”
Jonas Mekas, Soho Weekly News, New York, 1976 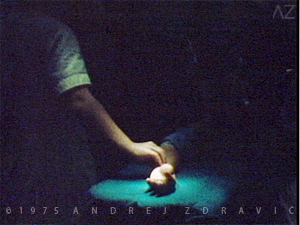 “Andrej Zdravič brings to his work in film a rare sensitivity and responsiveness to visual and aural phenomena. Phenix, a film which graphically depicts the process of plastic surgery, becomes in Zdravič's hands a dispassionate meditation on mortality. Like Stan Brakhage's autopsy film, ‘The Act of Seeing with One's Own Eyes’, and Hollis Frampton's cadaverous ‘Magellan at the Gates of Death’, Zdravič's film is a disquieting work which places both the filmmaker and viewer face to face with the limits of physical existence. Like Brakhage and Frampton, Zdravič appropriates the clinical context for a direct engagement in the human condition, for a heroic (and these are works which demand great courage) encounter with death. But, as its title suggests, Phenix expresses a commitment to life, to a reborn physicality. Zdravič engages the viewer of Phenix in a transcendent journey from the physical to the metaphysical, from the horrific to the sublime.”
Bruce Jenkins, Beau Fleuve Journal, Buffalo, NY, 1975 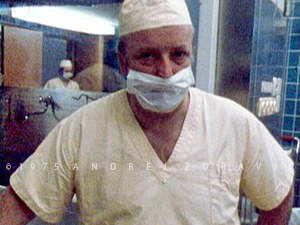 "...The brief, but powerful, documentary witnesses deeds that, though rivetingly physical, do not call on prurience for their referential energy: bits of operations performed by the film-maker’s father, a celebrated Yugoslav plastic surgeon, in a clinic in Ljubljana. Patients include victims of accidents both violent and circumstantial (grotesque birth defects); the work that transforms them makes for a hair-raising camera-eye view of amazing skill, professional detachment, artistic inspiration and seemingly superhuman compassion. The effect is first shocking, then soothing: immediately visceral, subsequently spiritual. The 14 minutes of the piece stretch to dimensions greater than clock hands allow...

Zdravič made Phenix in his early 20s; it was one of his first finished efforts, though its finesse with such strong material belies a neophyte’s touch. The film’s unobtrusive sense of form - brief sequences bracketed by fade-outs, over which a sound track of heightened breathing susurrates - accommodates both its unnerving contents and a viewer’s presumed need to assimilate strong medicine in small doses."
Calvin Ahlgren, San Francisco Chronicle, 1991