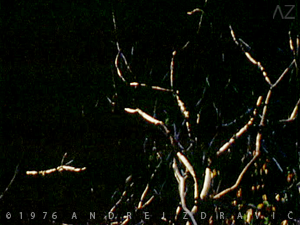 I shot Sunhopsoon in 1975 along cargo railroad tracks on the edges of Buffalo where I used to live during my studies. It took me five months to capture the flickers of sun rays caused by the passing train on trees and surroundings because on top of irregular trains, I also needed the 'cooperation' of the elusive sun. In the film, we never see the train itself; we only hear its squeaky symphony.
'Sunhopsoon' was the name of a vegetable store in New York's Chinatown. The rhythm of the words fit perfectly with my film.
AZ

Listen to Sunhopsoon soundtrack   I   26 sec 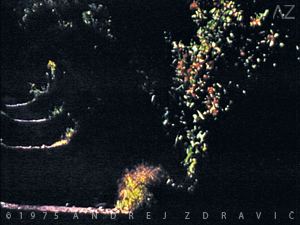 “Sunhopsoon is ‘about’ the effects on the landscape of a passing freight train, or ‘about’ the dance of light and shadow on perception - a clear case of the magic of the senses and the mind, the whole of life being greater and more mysterious than the sum of its parts.”
Calvin Ahlgren, San Francisco Chronicle, 1991 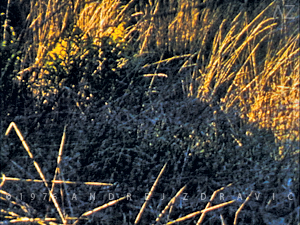 “Sunhopsoon was shot by the side of a railroad track. The light from a setting sun lurks between the cars of moving trains and hits the surrounding ground and vegetation as countless time-lapse rays. An incredible inventory of light sweeps take place. The light searching its way through planes of intertwined twigs, jumps and contorts itself into many unsuspected areas of the screen; successive lines of light ride on the ground toward the camera, or else it is a furtive image: a branch takes on the aspect of lighting. The rhythms and movements of the light are mesmerizing.”
Vincent Grenier, Idiolects Quarterly, New York, 1979