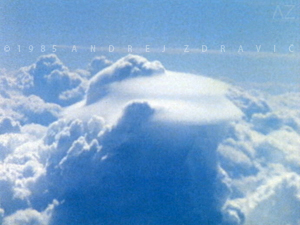 As the titles of the individual chapters suggest, the film aims to present the elusive members of the cloud family, a garland of optical phenomena resulting from the mixing of gases, water and light, and the life cycle/story of rain clouds. Rather than being a comprehensive atmospheric treatise, Air Trio invites the viewer to embark on his/her own exploration of this vast realm.
It was filmed in spots as diverse as Iceland, Slovenia, Europe, and the American South West, and was created on commission from the Milwaukee Public Museum (Wisconsin) to become a permanent interactive laserdisc exhibit.
AZ, 1985 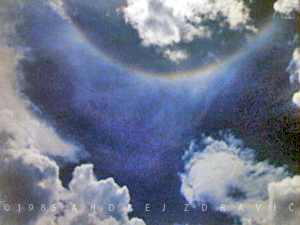 “Zdravič looks at the clouds as if he were a cloud himself. He does not want to relate to clouds as a technical person equipped with cameras and all kinds of gear. No, he is just a cloud amidst clouds, engaging in miraculous games of nature in the Ariel-like expanse. A game showing us how everything is constantly alive and forever changing, how nature is playing with itself. Like a child or an animal. A game in which the colours and the shapes of clouds spring from nature's fantasy, from its forces and winds, from its warmth and coolness, from its light and darkness. I would say that one could talk to Zdravič's clouds about everything that troubles and worries us on earth, and stirs our imagination in which the heart and thought materialize.”
Bojan Štih, litterary critic and essayist, Dnevnik, Ljubljana, 1987 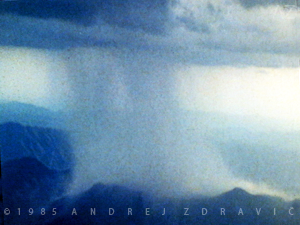